Here’s the Newswriting Format in a Nutshell

If you are taking your first journalism class, you’ve probably discovered that newswriting is very different from other kinds of writing. But don’t be intimidated. The newswriting format is very straightforward and you should be able to master it without too much difficulty.

Newswriting is based on the idea that readers have limited time and attention spans, which means you want to put the most important information in your story at the very top, or beginning, of the story. Then, as you go from the beginning to the end of your story, the information presented should be of gradually lesser importance.

This is known as the inverted pyramid format, because the heaviest, most important information is at the top while the lightest, least important stuff is at the bottom. 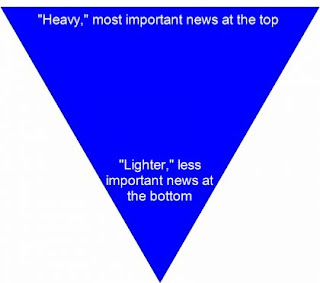 Writing this way makes it possible for readers to get the most important information without necessarily having to read the entire story. This also allows editors, who sometimes have to shorten stories to fit a page, to cut stories from the bottom, knowing that the information there shouldn’t be too critical.

The first sentence of a news story is called the lead (also spelled lede) and it’s the most important part of the entire article. The lead is where you sum up the main points of the story while saving extraneous details for later. The lead should generally be a single sentence of no more than 35 to 40 words long.

To figure out what should go into the lead, journalists use the fivr Ws and the H: who, what, where, when, why and how. In other words:

When writing a lead, you can use the 5W’s and the H as a kind of checklist to make sure you are including what you should. As you get more writing experience, this process will become automatic and you won’t have to think of the 5W’s and the H nearly as much.

Here’s an example of a pretty standard lead:

This lead gives us the most important points of the story – the fact that there was a fire that killed two people and destroyed an apartment building on Main Street.

But you’ll notice that more specific details – the exact time the fire occurred, the address of the apartment building, the names of the victims – have been left out. Obviously you will include that information in your story, but you don’t want to clutter up your lead with those kinds of details. Remember, the lead should just include the most important points, the broad brush strokes of the story.

I’ve already said that the lead of your news story should generally be one relatively short sentence. The other thing to remember is that the rest the paragraphs in your article should be fairly short as well, generally just one to two sentences each. News stories with short paragraphs look less intimidating to the reader, and this structure makes it easier for editors to cut overly long stories on a tight deadline.

One other thing to keep in mind about newswriting: it should generally be short, sweet and to the point. As I said earlier, readers have limited time and attention. They need to get their daily news fix as quickly and efficiently as possible. So make your stories substantive but convey information in them quickly and efficiently.